The Cegtów commune is situated in much forested proglacial stream valley of the River Mienia near the Minsk Area of Protected Landscape. Clean environment, agricultural character of economy, direct transport with distant Warsaw away by about 50 km (thanks to the rail­way line modernized after 2000 whose station is located in Ceqlów and the Warsaw-Terespol-Moscow international road) as well as well-kept routes intended for bike and walk tourism in the dense forest complex covering over 30% of the commune area, all that makes the region really attractive and touristy.

Reserve .Jedlina” of an area of 13 hectares established for protecting the multi-species forest with the dominant fir-tree and rare plants, i.e. reed grass and sedge, is the major natural asset of the commune. In the reserve there is an educational-natural path that consists of 9 stops equipped with direction boards and themed information specific to the place discussed, e.g. multilevel and multiorigin of the forest system, top­ ics about forest protection or hunting, to name only a few. The path starts near the railway station Mienia. Among natural assets the unpro­ tected area known as .Dęby Piaseczyńskie” near the village of Piaseczno is worth particular attention.

Cegłów, now the seat of the local commune authorities, in the years 1621 – 1869, had municipal rights granted by King Zygmunt III Waza of Poland. Rich deposits of clay made the city famous for pottery and brick manufacturing. The etymology of the present name of the city should be associated with this type of manufacturing. Originally, the village was present in state and church documents as Cebrowo. The church dedi­ cated to St John the Baptist and St Andrew, built in the 2nd half of the 16th century in a Gothic style and partially rebuilt in the 17th century, is a reminder of the period of the city’s development founded on munici­ pal rights. In the interior of the church there is the most valuable sacral artifact of the Minsk Land – a wooden altar made by sculptor Lazarus, apprentice of Wit Stwosz’s school. The altar was made in 1510 for the cathedral of St John in Warsaw, but it finally was installed in Cegtow. The church has an original, hung ceiling, a 17th-century wooden pulpit and forged door – the only relic of the former wooden church, which had existed earlier. whose building dates from about the year 1450. In Cegłów one can also see a Neo-Gothic parish church of Old-Catholic Church of Mariavites from 1906. The church is the seat of one of three Mariavite dioceses in Poland. The magnificent cemetery of the Mariavite parish speaks volumes about strong regional links with mariavitism. In the churchyard a large boulder is an attraction which, as the local legend has it, broke when there was a division of people into Catholics and Mar­ iavites. In Anna Jagiellonka Square one can see a characteristic build­ ing of the former orphanage (the so-called libella) with the low-relief presenting the pelican. The building was built in the 19205 by parson of the Catholic parish – priest Katuszewski. The orphanage had functioned there by the 1960s and then the seat of the centre for children of special care managed by CARlTAS was established here. In Anna Jagiellonka Square there are two important places of national memory in Cegf6w, namely – in the square a plaque commemorating Polish scouts killed on 16 September 1939, and on the wall of the building of the health cen­ tre – a plaque commemorating 26 inhabitants shot by Hitler’s soldiers in 1943.

In Mienia the building of the former hospital registered as being of historical and architectural interest, now the St Joseph Social Service House is worth special attention. It was built in a classical style in 1809. In the area of the St Joseph Social Service House there is a housing building, the so-called farm hands’ living building, from 186l. In 1831, in the hospital Russian soldiers from the army of Marshal Dybicz and furtively Polish insurgents were cured. The insurgent cemetery, named by the local people .Trzy Krzyże,” is the forest near the railway station. In Mienia there is also the Social Service House .Jedlina” The complex of buildings includes the prewar Antituberculotic Sanatorium for Children of Warsaw Tram-Drivers. War cemetery from the period of the November Uprising in Mienia

In the register of building of historical and architectural interest there is twice mention of the village of Kiczki where near the pond dammed up on the little river Piaseczna a wooden Catholic church dedicated to St Ann from the 18th century has survived as has the former water mill. The building of the manor, not registered as being of historical and architectural interest, from the end of the 19th century is also an important one in which by 2000 a primary school had functioned.

Since the beginning of the 19905, self-governing bodies have been ac­ tive in improving the infrastructure of the commune. This approach has to a great extent influenced the lives of 6,500 inhabitants. A water purification station and water pipelines in 15 out of 19 Sołtys districts were built. There were investments in the building of water treatment plants and organization of the system for selective collection of waste. Thanks to the initiative undertaken by the self-government, 18 Sołtys districts were equipped with telephones. Socio-cultural life is organized around the Commune Public Library and newly established nongovernmental orga­ nizations from which the Association „Kulturalna Przyjaźń” established on the initiative of young inhabitants of the commune, is the biggest one. Near Cegf6w one can attend lessons in horse-riding in the stable organizing hippo therapy for disabled children. The number of active rural women’s circles cultivating the regional culinary and handicraft tra­ ditions is a real phenom on a poviat scale. 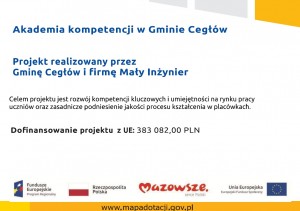 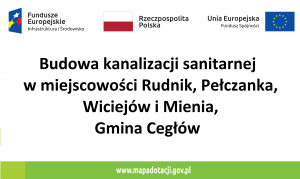